“It’s 1926 in Washington, DC, and while Anti-Sorcery activists have achieved the Prohibition of sorcery, the city’s magic underworld is booming. Sorcerers cast illusions to aid mobsters’ crime sprees. Smugglers funnel magic contraband in from overseas. Gangs have established secret performance venues where patrons can lose themselves in magic, and take a mind-bending, intoxicating elixir known as the sorcerer’s shine.

Joan Kendrick, a young sorcerer from Norfolk County, Virginia accepts an offer to work for DC’s most notorious crime syndicate, the Shaw Gang, when her family’s home is repossessed. Alex Danfrey, a first-year Federal Prohibition Unit trainee with a complicated past and talents of his own, becomes tapped to go undercover and infiltrate the Shaws.

Through different paths, Joan and Alex tread deep into the violent, dangerous world of criminal magic – and when their paths cross at the Shaws’ performance venue, despite their orders, and despite themselves, Joan and Alex become enchanted with one another. But when gang alliances begin to shift, the two sorcerers are forced to question their ultimate allegiances and motivations. And soon, Joan and Alex find themselves pitted against each other in a treacherous, heady game of cat-and-mouse”

My Favourite Quote: “The garden’s magic is now something separate, something more, than just the two of them together. It’s like one of them is taking inspiration from the other, both of them pushing themselves further than they’d ever dare or think of alone. Their magic garden is everywhere, scented, heady.”

I was so pleasantly surprised about how much I liked this book. I picked it up on a whim because the summary sounded interesting and I was in a witchy mood, and I’m really glad I did.

It is set in an alternate historical universe where the 1920’s prohibition of alcohol is replaced by the prohibition of magic and witchcraft. This is because sorcerers can produce pure magic, which can be used as a recreational drug called shine. I initially was a bit worried about how believable this story line could be but it was done really well and in a very interesting way.

This story is told in the perspectives of two main characters. Alex and Joan and they are such different characters but still quite believable. They are both coming from dramatically different backgrounds and both characters are both very flawed because of their backgrounds but also really relatable.

I thought this book was incredibly immersive, and such a fun reading experience! The descriptions of the magic are beautiful. There are a few nature scenes that are conjured by magic and they just sounded so whimsical and wonderful. The type of magic in this story reminded me a bit of the showmanship of magicians, but with real power. Which I think is a really neat idea!

Okay, this is an incredibly random thing to compare this story to, but for some reason this book really reminds me of “Now you See it”. If you have never heard of this movie, that is completely understandable, as it is a 2005 made for TV movie on Disney. I haven’t seen it in years but I really loved it, but I haven’t thought about until this book sparked my memory. 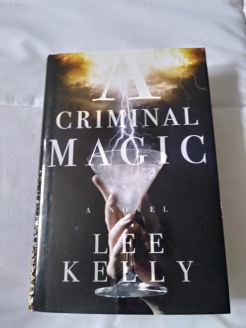 My one critique  is that I don’t like the cover of this book. I feel like it looks like individual pieces could have come together but,they  just don’t. This story is set in the 1920’s and I would have loved if the cover was in an Art Deco style or even just very simply done. I only mention this because I really love cover art.

Overall, I really enjoyed reading this book and I would recommend it to anyone looking to add some magic to their reading! And if you also love the 1920’s this might be the book for you!

If you have also read this book I’d love to hear your thoughts!

A lover of all things magical View all posts by thespellboundlibrarian

6 thoughts on “A Criminal Magic– Review”